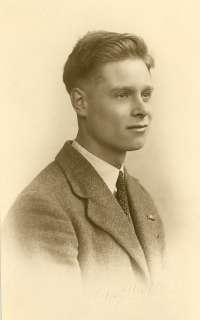 My uncle, Clem Humphreys, was a photographer with a studio not far from the chapel, and if he looked like an artist with his tall elegant figure and his flashing diamond ring, his business methods were very sound. Many of his customers came from the chapel, but representatives worked the nearby colliery villages, where the people paid a few pence a week until there was enough money on the card, then they came into the studio and the photographs were taken. There was no credit, and there were no 'bad debts' in that establishment.

Ted Rogers as a young man,
Photograph by Clem Humphreys 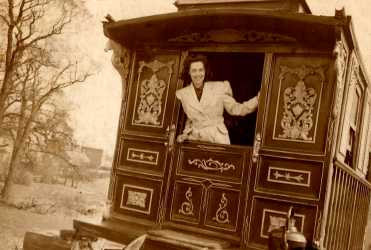 In the autumn of 1940 we were back in County Durham and I was working on another ordnance factory near a little village called Aycliffe. At first we lived in furnished rooms in Darlington, but they were damp and uncomfortable, and the landlady wasn't too pleasant either. Desperate to get on our own, we bought a tiny horse-drawn showman's caravan for twenty-five pounds and had it put in a field on the outskirts of town. We found that the life suited us both very well.

The caravan was built of mahogany but the outside was painted in bright colours. There were little shutters at the windows and carved horses' heads stood out at each corner at roof level. The door had amber glass handles and the wooden spokes of the wheels were picked out in different colours. For cooking and heating there was a coal burning black iron stove. At one end of the van behind mirrored sliding shutters was a four foot bed, and under that was a tiny single bed. It was completely furnished, we only lacked a bath. We bought a tin bath and kept it under the caravan. When we put it on the floor in front of the stove to bathe, it took up all the floor space. 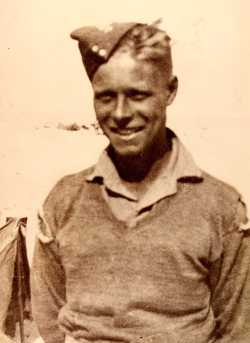 Ted in the uniform of Montgomery's
"Desert Army"

I enjoyed the life of constant movement in the open desert. The smallest unit in an anti-tank regiment is the gun crew, and for much of the time I found we had a very independent life. Water was strictly rationed, but petrol which came up in five gallon tins was abundant.

We always washed our clothes in petrol and cooked our food on fires made of half petrol tins filled with sand which was then soaked with petrol. These fires burned steadily and for a surprisingly long time. Mostly we ate tinned food, but I had my first experience of dehydrated food when that was issued to us. We ate vast quantities of army biscuits which were the only spoils of war we had picked up from the field at El Alemein. 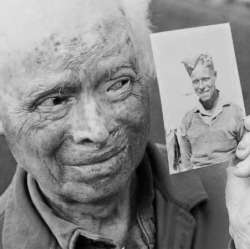 Ted Rogers, photographed by Roger Bamber for a Guardian newspaper feature on the pioneers of plastic surgery.